Casa Batlló is one of Gaudi’s most famous masterpieces and is located in the center of Barcelona. It is commonly referred to as Casa Dels Ossos or House of Bones, as it has an exterior that resembles the bones of an animal. 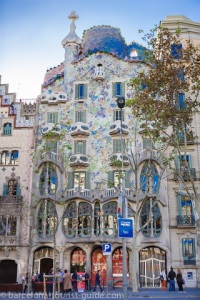 First a bit of background on Gaudi in case you don’t know about this wonderful and brilliant man. He was an architect who lived most of his life in Barcelona. While at school his grades were poor and he barely passed classes in order to graduate. When handing him his degree, Elies Rogent, director of Barcelona Architecture School, said: “We have given this academic title either to a fool or a genius. Time will show.”

And indeed, I believe he was a genius; with that usually comes a strangeness of character. Gaudí was often depicted as unsociable and unpleasant, thought of as arrogant and very gruff. He became very religious, dressed like a beggar, and in fact devoted the last years of his life living at Sagrada Familia, the church he was building, dedicating himself to the project. Unfortunately, he was struck by a passing tram on his way to his devotional prayer. He was mistaken as a beggar, and by the time he received the proper medical help, it was to late.

Everything he created came from nature and it’s geometric forms, this is apparent when you are inside the Sagrada Familia church. He wanted the inside to feel like the inside of a forest. As a side noted, they are still working on completing the church, estimated time it will be done? The year 2027…

And as beautiful, intriguing and awe-inspiring the church is, I really loved the Casa Batlló more. It was a remodel of an existing house designed for a upper middle class family. Gaudi’s work is considered Modernisme or Art Nouveau in the broadest sense.

The façade is decorated with mosaic from broken tiles and begins with an orange color then moving into greenish blues. The roof of the house looks like the spine of a dragon, curving and twisting then ending with a stunning turret at the top. You are only allowed into the main living quarters and the uppermost floors.

His obsession with lighting and air ventilation creates even small spaces that feel open and inviting. The slates in the walls create a flow of air throughout the house and shaped so no water will enter when it rains. There is a light well that runs down the middle of the house to let natural light into all the rooms. The tiles at the bottom are lighter and gradually become darker at they reach the top because the light tends to diffuse the color.

When walking through the house it almost feels like Alice in Wonderland because of the curved windows, walls, even the handrails and staircase are wonderful. Everything that he made in the house is to fit the shape of your hand, the hand railings, the window locks and the clasps on the windows. 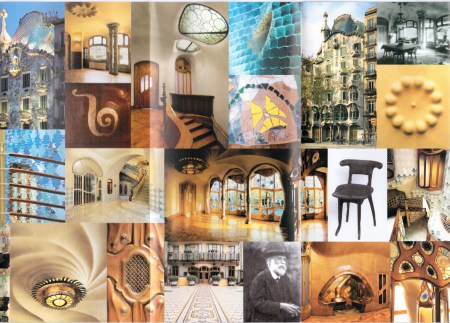 There are so many works of art and architecture he created, I can’t begin to mention them all or this would roll on and on…too long for a blog. So, instead I picked one piece to talk about, my favorite. The best thing…go visit if you get a chance.

Diary of an In Seine Blonde